There has been a lot of breakup in our extended circle lately, and each one seems to be fitting the same pattern. The “giver” in the relationship keeps giving, and giving in, without standing up for, or taking care of, him or herself. Finally, he snaps, and ends the relationship.  The thing bent until it broke. And everyone rallies around the so-called giver saying, “You did everything you could.”

I don’t think so.

What you did was become a “victim” of your dance with your partner, and in your intended generosity, you sold out your partner by allowing your resentment to build until you burst. One might also say you belittled your partner, by treating her (or him) with kid gloves – like she just wasn’t big enough to handle your being authentic.

And maybe she wasn’t. 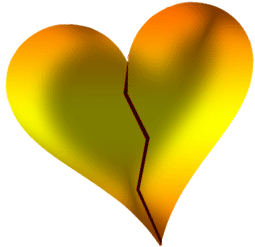 But isn’t that how we grow?  If you break (and properly set) a bone, it grows back stronger. Five years ago, JoAnn and I ended our four-year relationship. We made a clean break. Then we healed it, and today we are much stronger than we ever were in our first four years.

I had to learn to stand up to JoAnn’s rage. To be both a heat sink to help absorb it – so that she could discharge it – but to also know when to say enough, so that I didn’t become consumed by it. My friends all agreed I should end it. But they didn’t know what a precious jewel I had, and I was a stand for what was possible for us, and a stand that JoAnn was so much more than her frailties.

When we are frail or acting out of our lower selves, we can convince the people around us that we’re just not up to being adult, strong, passionate, resilient human beings. In my case, I had to stop being a victim and stop treating JoAnn like she was some fragile, breakable thing. This is a woman who survived child abuse, spousal abuse, who told an armed robber, “Go ahead and shoot me, you’re not getting my money,” who has built successful businesses, and who spends most of her time healing the physically and psychologically challenged.

I wasn’t going to be the one to help keep her small anymore. That’s not what partner’s do. And thank God, because among her many gifts, she’s also the most amazing partner – beyond what I’d ever dreamed of.

If you’re the giver in your relationship, and you notice you’re being resentful, stop it. Stop ripping your partner off. Treat him like an adult. Confront what you’re not confronting. Don’t be afraid to bend it until it breaks. Take it from me, straight from the heart, it might be the best thing that ever happens to you.